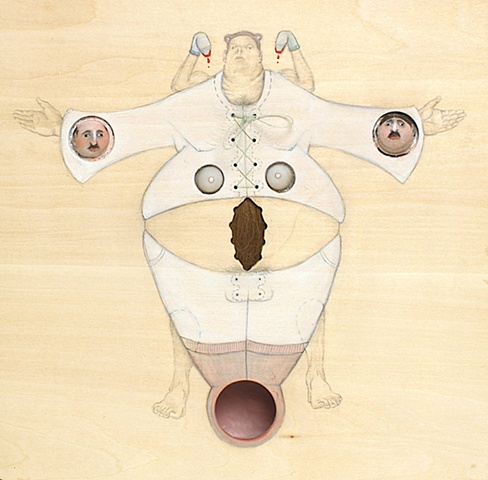 “I’m not interested in relationships of (noun)_ or (noun)_ or anything else. I’m interested only in expressing _(adjective)_ human _(plural noun)__ – tragedy, ecstasy, doom, and so on – and the fact that lots of _(noun)__ break down and cry when confronted with my _(plural noun)__, shows that I __(verb)__ those basic human emotions… The people who _(verb)_ before my pictures are having the same _(adjective)_ _(noun)_ I had when I painted them.”

Similar to the phrasal template word game Mad Libs, I create works that rely on playful manipulation and distortion; I act and react while negotiating between attraction and repulsion. Like the above example where I removed certain words from the brilliant painter Mark Rothko’s quote, meaning is suddenly lost or changed, and one’s desire to decipher the artist’s intention is replaced with their own meaning and context. The result is funny to me- especially when it’s off-putting. I feel like the perversion of context starts to reveal a basic need for the absurd. Perhaps this is the mental space that relieves us from the heaviness of the world.

I often include figures engaged in a mixture of activities at various points of defeat, often with humorous, eroticized, or foreboding undercurrents. Animals become fixtures, trophies, and other artifacts marked by domination. The use of playful colors and shapes attract the viewer while dismembered bodies and other displays of violence repulse them. RJ Calabrese was born and raised in the suburbs of Trenton, NJ. He has since moved to the rolling hills of Hunterdon County where he, his wife, three boys, dog, and 9 chickens are surrounded by deer, horses, and other animals he never saw in Trenton.